“Kusur” begins on a rainy night, when retired Assistant Police Commissioner Dandavate volunteers his service at a police control room. As the hours go by, anonymous residents of Mumbai seek help. The night presents us with a series of twists and turns while the end unearths the truth in a way that leaves us holding our breath. When Dandavate exits that control room, he says “I am indebted to this night … good intentions alone don’t absolve us of our sins. Thank you, Kaveri, for helping me realise this!” The taut plot with its minimalist setting gradually unravels this mystery. The elaborate sound design is a vital character in itself, disturbing our complacency and overturning our assumptions. While excavating the rich subtext, the audience isn’t permitted to be a mere distant, passive onlooker. The “Mistake” takes theatre lovers on a claustrophobic and thrilling, yet emotional and immersive journey. This theatrical experience is one to linger on, way beyond the curtain drop. The play has been directed by Amol Palekar and Sandhya Gokhale and is adapted from the film “Den Skyldige” written by Gustav Moller and Emil N Anderson, by Sandhya Gokhale, who has given her own novel touch to the entire script.

Rotary Bangalore Indiranagar has been in the fore front of serving the community for over three decades and has helped in catering to the needs of society by arranging blood donation camps, free eye surgeries, subsidised heart surgeries, palliative care at KARUNASHRAYA, a 75 bed FREE facility for terminally ill cancer patients and many more. They are now proposing to equip Jayadeva Hospital with a Cath lab at a cost of approximately 4 crores which will be partly funded by Rotary Bangalore Indiranagar and the major portion of the cost would come in as a Global Grant from The Rotary Foundation. The Cath Lab will help in reducing number of open heart surgeries, as it will provide corrective procedure with minimum invasion. The proceeds of this play will be utilised towards building the Cath Lab at Jayadeva Hospital.

We speak to Amol Palekar on his journey and his other passions.

Amol: The script of this play was Sandhya’s birthday present to me on November 24. This is the 18th time we are staging this play. We have taken it to many cities including Kankavli, Delhi, Chandigarh, Assam, Guwahati, Bhubaneswar, Ahmedabad and other cities. My character Ashok Dandavate is a 75-year old retired, upright, straightforward assistant commissioner of police. I’m playing my age in this play. I really liked the script and it has been directed by both Sandhya and me.

Amol: Throughout my career I have tried to bring a believable quality to my character. I try to make the character non-obtrusive. I don’t want Amol Palekar to remembered. I want the character to be remembered. Yet, funnily, in most of my films, people remember Amol Palekar, not the character. I come from a school where director is the ultimate. I fulfil his vision. I was privileged to work with every top director and technician in the country and learnt so much from them. Now, at the age of 75, to retain the physical energy is demanding. It is also tough because, a gap of 25 years is a hell of a lot. It took quite an effort for me to brush away the rust. Also, most of the audience that comes to see our performance, knows me only through my film characters, therefore, for them to see me as an actor on the stage is also challenging and exciting.

Amol: I have always been active in all the three spaces that I’ve dabbled in – films, theatre and painting. I continued to pursue all three of my passions simultaneously. I was holding my art exhibitions, even while I was acting on stage and also shooting for films. So, I would say, my journey has been very vibrant. When I turned 70, five years back, I went back to my first love, painting. Today, I’m primarily a painter. My second love is theatre and I will do 25 performances of this play. This one in Bangalore is our 18th performance. I would get back to films, only if there is something very exciting, challenging and something that really touches my heart, but certainly not as a routine, just to make a comeback. I like to try something which I haven’t tried, even if there’s an inherent risk in it. I have always done that.”

Amol: I have acted in Marathi, Bengali, Malayalam, Kannada, Telugu and other languages. I have always believed in regional cinema. Infact, when I got the Malayalam film offer, I told Balu Mahendra when I was acting in Olangal, that even if he were to direct a film in Hebrew, I would learn Hebrew and do it. I’m not the ones who believe that if they have made a name in Hindi cinema, they should not look at other languages.

Amol: I’m open to criticism and like to learn from it to help me better my performance. I have the biggest critic at home (he smiles). In Marathi there’s a saying, the biggest critic should be your neighbour. I don’t even have to wait to meet my neighbour. My wife Sandhya’s analysis and comments not only keep me on my toes, but also help me improve. We may argue, have a fight, but ultimately, I know her criticism is without any malice and it is completely with love and affection towards me and my work. Once you’re sure of that, you cannot be anything else, but open to it. Honestly, when I was given the “Boy Next Door” tag, I used to get disturbed, but I realised it’s the people who are not looking beyond that and I decided to ignore all that. Whatever I did subsequently, was my quest to find answers to all the questions that I had for myself as an artist, as an actor, a director or a painter. If they’re trying to label me they’re to trying to find the easy way out with tags. I’m not going to box myself as an artist, so it’s their problem, not mine.

Amol: We take out time to visit art galleries and watch theatres regularly. We go abroad atleast four times every year for different festivals. We love going to Venice Biennale, Edinburgh Theatre Festival and so many other art and theatre festivals across the world. 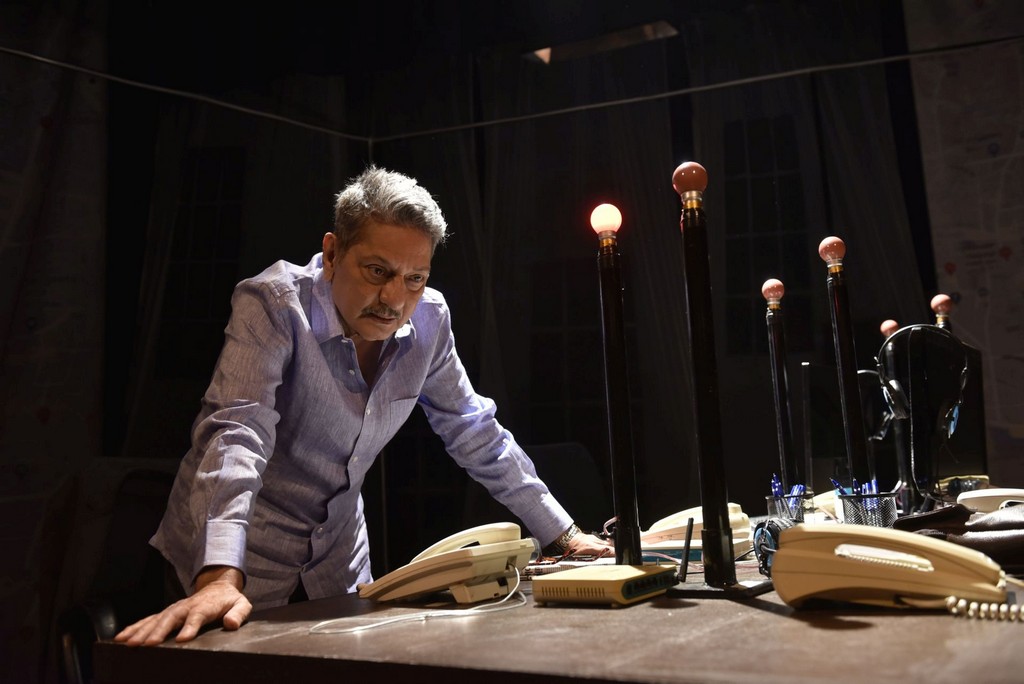 Amol: Zarina, Gulzar and a few others. Vidya is no more.

Tickets are available on www.bookmyshow.com