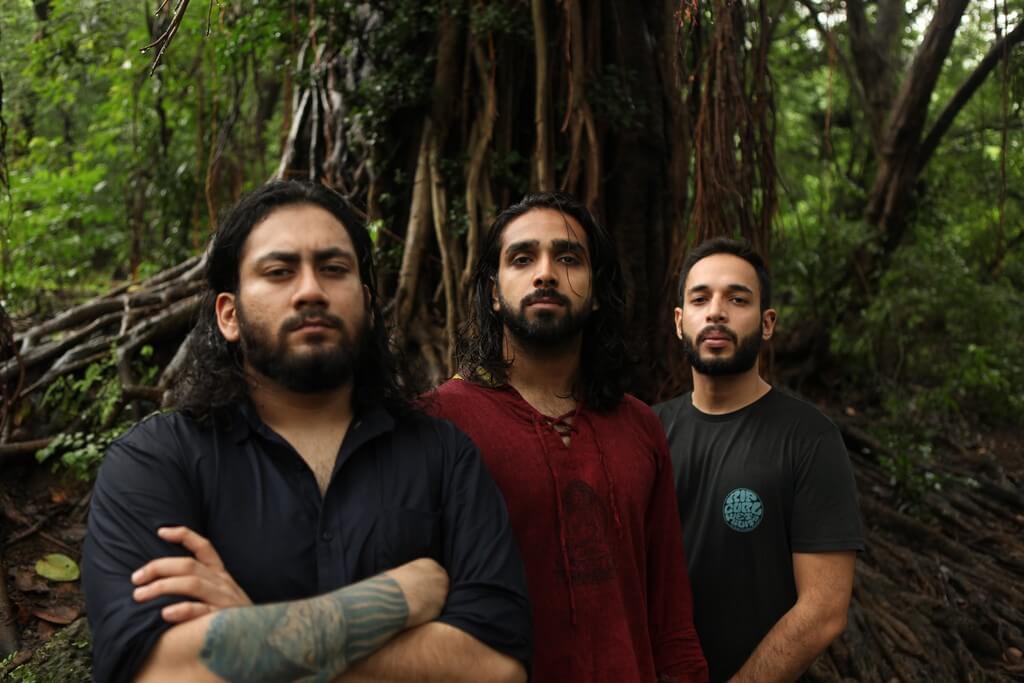 Of The Lotus & The Thunderbolt, the second album release by Midhaven. Blending traditional Indian strains with traditional & progressive Metal by the Mumbai-based trio. The seven-track concept album witnesses the musicians diving head-on into the layered concept of time itself, as they pay homage to Shiva as Mahakaal – the ‘ruler of time’.

The band describes the album as ‘a universal, yet personal experience that is being conveyed in the form of heavy metal. The world hasn’t had enough metal from this side of the planet.’

In a way, the three-piece act thinks of this album as their humble attempt to present a new shade of ‘Indian’ Metal music through tracks such as the Para Bhahman & Codeman, Zhitro, Mahakaal and Bhairav among others.

The concept record follows ‘the single but universal soul’s journey to realization, with symbolisms that are deeply rooted in the collective Indian subconscious. It’s curated in a manner wherein each song appears as though it’s a chapter in a book, conveying individual meanings that ‘when heard together, form a holistic understanding of the universe’.

Karan R Kaul (vocalist & guitar player), talks about how their muse — the very quest of existence led the trio here, “I’ve spent my whole life in awe of existence itself, the sheer scale of things and how it ties into our ancients and their observations. Astronomy or sci-fi, it’s always the same question, why? And as a musician, your inspirations come from the very things you consume, so writing an album with a historian & a proghead time-keeper was the most natural thing that happened to me. Somehow, cosmic time and ancient history subconsciously guided this band into lyrical & musical concepts.”

Bandmate Aditya Mohanan (Guitar player/vocalist) concurs, “Being an archaeologist/historian, the fascination with ancient philosophy and metaphysics was quite organic. So when you’re constantly engaging with ancient perspectives on how time is a continuum and multiple universes exist simultaneously, it’s hard to not want to write an album about it,” he says.

Although the band had finished recording the album back in 2019, the Covid-19 pandemic thwarted their plans to release the album with a tour and they utilized the delay to perfect the record further. Once the second wave hit the country, the band felt that they had waited enough and decided to release the album on July 8th, 2021. 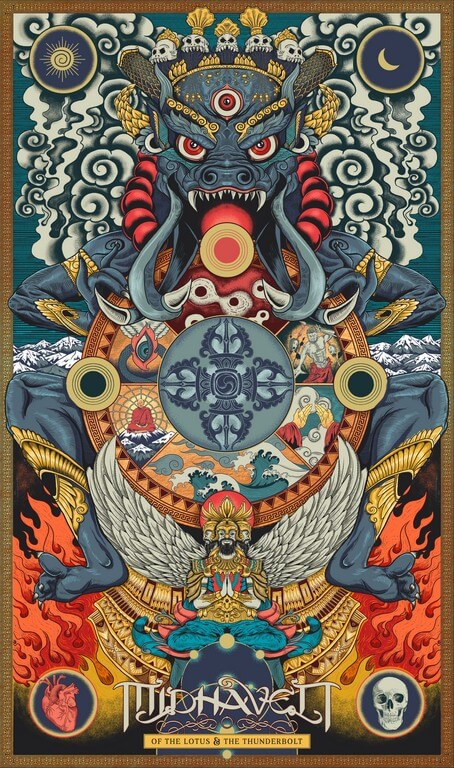 The album was mixed and mastered by renowned Australian producer Forrester Savell, who has worked with several global musicians of repute (namely, Animals as Leaders, Make Them Suffer, & Karnivool among others). Forrester’s input brings out a sense of refinement, all the while keeping pace with the raw, analog ways of the recording process — bringing soul to the sounds of this eclectic album.

The exploratory, raging and visceral record is accompanied by stunning artwork that encapsulates the theme of the record beautifully, making the booking a physical copy of the album – ‘a must’ for the discerning listener. Visualised and executed by prolific indie artist Gaurav Basu (alias – Acid Toad), the artwork explores the lyrical subtleties of the album in a visual manner. The painting stylistically borrows from the Tibetan Buddhist ‘Thangka’ paintings and depicts a contemporary yet personal understanding of time in an anthropomorphic sense.

Contained within the gut of Mahakaal is a mandala that reflects the thematic progression of the album, while enabling the perceiver to make sense of how each song ties into each other to form a comprehensive whole. Bedecked with heavy symbolisms, the artwork does not merely serve a descriptive purpose, but adds to the composition of the theme that both, the band and the artist, are striving to convey.

The album launch was preceded by a video single release of roaring heavy-duty track called Primal Song (track 2) that looks at anger, pain & frustration as mere echoes of the ‘primal fire’ that binds all life together —  on June 21st, 2021.

Founded back in 2011-12, the band released their debut EP Tales From the Tide in 2013. Soon after they dropped their first EP, Midhaven became one of the first few indie/Metal bands of the country to be signed by a major multinational music label such as Universal Music Group (UMG). Their first album Spellbound was released by UMG in 2014.

Of The Lotus & The Thunderbolt – concept

The album, in essence, is about time. Not clockwork… universal, cyclical time. We’ve grown up with a belief system that has repeatedly told us that things that have happened will happen yet again, and again, and again.

Time is seen as a continuum, and there are more universes than just this one. These are subjects we’ve debated and discussed from time immemorial. From the ancients, right down to us, this is how time is experienced where we come from. So naturally, when we started discussing lyrical concepts, time is something that all subjects were ultimately pointing toward.

We were acting from an awareness that in this grand circuit of the cosmos, the self is constantly recreated in every moment. It’s not just about time, it’s also about a very personal experience of that time, through the aeons as life itself. It ultimately boils down to how time chisels to perfection the one universal soul that finds itself echoed in every living being.

The band members summarise their experience: For reasons not entirely known to us, it felt as though time channeled itself through us for the creation of this album. We were merely conduits in this process.

Para Brahman | Echoes from the previous cycle. ‘Why?’,the ultimate inquisition, is the running theme of the song. Man is privy to all the information, yet there’s loss and anguish in his screams, setting the tone of the forthcoming exploration that is the album.

Primal | An expression of the ancient fission that life felt when it separated from itself. Anger, pain, frustration… are all merely echoes of primal fire that binds all life together. The urge to maim, to kill, is what Primal Song is all about.

Codeman |  A representation of the modern man, the one who has sudden realizations, the one who seeks meaning and purpose. He wails to the sky, questioning the creator as to why he is forced to bear the curse of testosterone perpetually. And then, rain.

The Immanent Effervescence of Sorrow | and then, rain, the release of pent up emotions is channeled through this interlude, which leads the album into a deeper, darker place. It sets the tone for the two heavyweights to come.

Zhitro | the bending of the envelope. Time does not seem linear to man anymore. Transcendence seems imminent yet the interwovenness of the universe prohibits him from feeding his ego, his identity. The self-leaks and spreads out, thinning the boundaries between the sentient and the absolute.

Mahakaal | the fabric of time has shed itself. The realization that was there all along is now apparent.

We reach Mahakaal, the great entity that is Time. What is now seen can never again be unseen…

Bhairav | the outro instrumental, beyond the veil of linear existence. This instrumental track, composed on Raag Bhairav, conveys thoughts and realizations beyond the grasp of human language.

Of The Lotus & The Thunderbolt, a new concept album, Inspired by Lord Shiva by the Mumbai based Metal trio Midhaven brings an Indic touch.

Mixed and Mastered by Forrester Savell